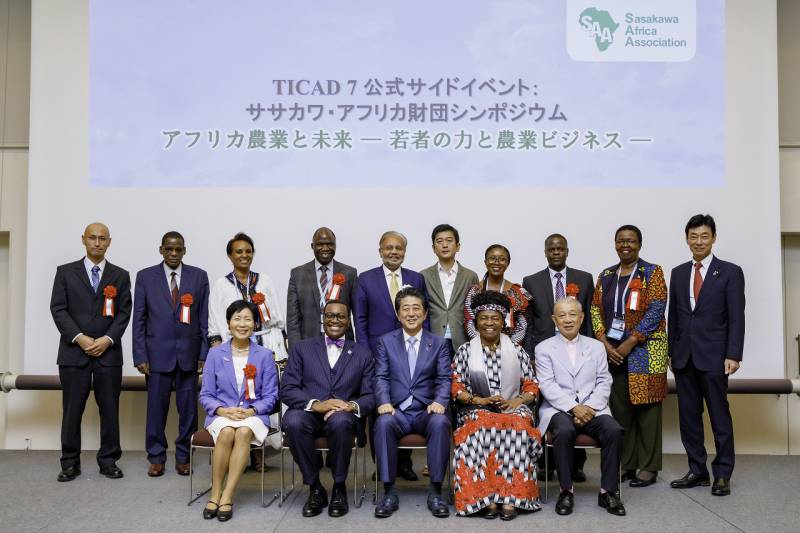 Wednesday 11 September – A “new era” of opportunities and cooperation in agriculture between Japan and Africa was heralded at a symposium organised by the Sasakawa Africa Association (SAA), at the seventh Tokyo International Conference on African Development (TICAD VII).

‘Sasakawa in Africa: Building on the Past, Looking to the Future’ heard a commitment from Japanese Prime Minister Shinzo Abe to strengthen Japanese cooperation with Africa, and saw a new agreement struck between SAA and the Japan International Cooperation Agency (JICA) for future partnership.

Held on Wednesday 28 August at the Pacifico Conference Center in Yokohama, the symposium brought together government officials, agriculture experts, and young farmers for a series of presentations and discussions focused on the issues of youth employment and entrepreneurship in agriculture, and the ways in which Africa and Japan can continue working in partnership to improve opportunities for young people in sustainable, profitable farming enterprises.

Speaking at the event, Prime Minister Abe paid special tribute to SAA’s “30 long years of continued devotion and engagement” in Africa, saying that Japanese technology can “play a key role in innovation, which is the key to agriculture”. Ahead of the ceremony, SAA Chairperson Hon Prof Ruth Oniang’o had signed a new Memorandum of Cooperation with JICA, deepening the cooperation between the two organisations and laying the groundwork for more joint working in the future.

A new era of opportunities

For more than 30 years, SAA has worked with smallholder farmers across African countries to support agricultural development and food security. Through the Sasakawa Africa Fund for Extension Education (SAFE), it works with universities across the continent to develop responsive, custom-made agricultural education programs that reach out to professionals working directly with farmers to improve their livelihoods.

The event was opened by Mr Yohei Sasakawa, Chairman of The Nippon Foundation, who shared his hope that youth in Africa will take agriculture into a “new era” full of business opportunities. Mr Sasakawa’s dedication to SAA was acknowledged by Hon Prof Oniang’o, who led the audience of more than 150 delegates in a show of thanks for The Nippon Foundation’s sustained support every year since 1986.

Keynote speaker Dr Akinwumi Adesina, President of the African Development Bank, heralded Africa’s potential to become a “global powerhouse in food and agriculture” and spoke of our shared responsibility to address the effects of climate change through investment and innovation, especially for youth in Africa. Dr Adesina was joined in his call by special guest speaker Dr Naoko Ishii, CEO and Chairperson of the Global Environment Facility (GEF), who talked about the challenges of climate change for food security, and the areas of common interest between SAA and the GEF in focusing on the value chain and climate-smart technologies.

Delegations praised SAA for its positive influence on agricultural development in more than 30 years of working throughout Africa, and the extent to which Sasakawa has become a household name for rural communities in some of their countries. In all cases, the SAFE program was recognised for its remarkable impact on agricultural extension curricula in the countries where it operates, and held as a model of responsive, sustainable intervention for human resource development and capacity building.