Interview Series 4: A story of the Ethiopian Extension Director -How SAFE program brought me where I am- 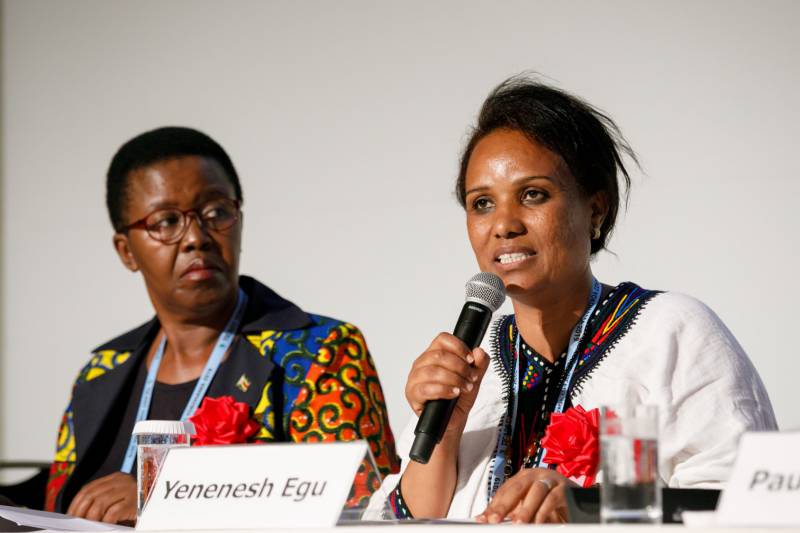 Yenenesh was part of the panel discussion that took place during the SAA official TICAD VII side-event in Yokohama on 28 August, where she engaged with other young farmers and agriculture professionals and experts on the subjects of farming, entrepreneurship, and youth engagement in Africa and Japan.


Q. Tell us about yourself
I graduated from the SAFE program in agricultural extension at Haramaya University, Ethiopia, in 2005. Around that time, I was working as a development agent at grassroots level in the Sigezo kebele, in what was then the Omo Shelleko [now Temabro] woreda of Kembata Tembaro zone in the Southern Nations, Nationalities, and People’s Region [SNNPR] in Ethiopia.

I worked in the kebele supporting farmers by providing training and advisory services in crops such as enset, root crops, coffee, maize and soil, and also in land management practices including compost making, irrigation, and others. The area itself was very remote; we got transport services only once a week, and public utilities like telephone service were very limited.

My working area at that time was 60 kilometres from Durame Town, the capital of the Kembata Tembaro Zone. As there was no public transport in the area, we had to use trucks for transportation. Occasionally the truck would break down on the way, and you would have to walk more than five kilometres on foot. I sometimes had to walk 12 to 13 kilometres to give training sessions in remote communities and then come back the same day.


Q. How did you find out about the SAFE program?
When the SAFE program was announced, I immediately decided to apply for this opportunity. Fortunately, I passed the entrance exam and enrolled at Haramaya University to study at BSc level in agricultural extension. Everyone was saying “You are so lucky!!” and congratulated me. The area I was working was so remote, and getting such an opportunity – especially for women – was a very rare thing. It was a godsend.

When I got that chance to study with SAFE I was so happy and my family were all very happy as well. Unfortunately, there was a great challenge presented on the part of my bosses. The woreda agriculture office initially was very reluctant to grant me the permission to leave my post for study, but eventually, I was able to convince them and I was able to receive my salary throughout my study year. My tuition, food and dormitory cost were also covered under SAFE program.


Q. What did you hope to gain from studying with the SAFE program?
Before SAFE, I had a diploma-level qualification in general agriculture. I was around 25 year old at the time. I wanted to upgrade my education, but I didn’t have the financial means. SAFE scheme gave me the chance to be able to do this, covering the cost of tuition, food, dormitory and even my research.
My Supervised Enterprise Project (SEP), which I undertook as a part of my studies in the SAFE program, became well known in the Oromia region. There was even an Oromia Minister that came to visit it! My project was on cassava production and processing: postharvest handling and use. My cassava project was hosted by 12 farmers – eight females and four males. Before my intervention, farmers would typically prepare cassava only by boiling. I organized a field day attended by many participants including farmers, agricultural experts, administrators, teachers, and representatives from NGOs, and demonstrated postharvest handling techniques, including recipe development for injera, bread, cookies, sauces, and other foods. The field day participants provided me with excellent feedback.


Q. What happened after you graduated?
Having graduated after two-and-a-half years of study, including eight months of SEP work, I returned to my working area and was assigned as Enset and Root Crops expert at the woreda agriculture office. Three months later I was promoted to the zonal agriculture department as Planning and Program head.
I worked for about one year at zonal level. After this, I was appointed as a rural women’s expert at the Regional Agriculture Bureau where I served for about four years. But then, I got the chance to study for a Master’s degree thanks to a Sida [Swedish International Development Cooperation Agency] funded scholarship.
After I was awarded my second degree, I joined the Ministry of Agriculture for two years as a Senior Extension Communication Expert. I was then delegated as Acting Extension Director for one year, and as a result of my performance I was given the permanent position of Extension Directorate Director.

No one, including myself, ever expected my career to be like this. I am a woman who used to work in a remote area with no phone service and no internet, but I got the opportunities, thanks to SAFE.


Q. How would you say that you are applying the knowledge that you learned on the SAFE program in your current role and responsibilities as Director of Extension?
Many development partners talk about empowerment and mainstreaming of women, but in practical terms, it is rare to see any concrete outcome. But the SAFE program gave us the chance to learn, and through it I earned my degree – something concrete, something real which you can feel and you can see it. As a Director of Extension, now I’m trying to widen this type of approach for bigger impact. It is very important for a woman to be given a chance, however small it may be. For my case, I kept trying to open more and more for myself. Now that I got the chance, I am trying to open chances for others.


Q. What are your goals and ambitions for your future career?
My future plan is two-fold: advancing my education and my career. I aspire to pursue my tertiary degree if I get a family scholarship, and also to seek higher-level positions within the government, so that I can bring the bigger impact to the society, especially for women.