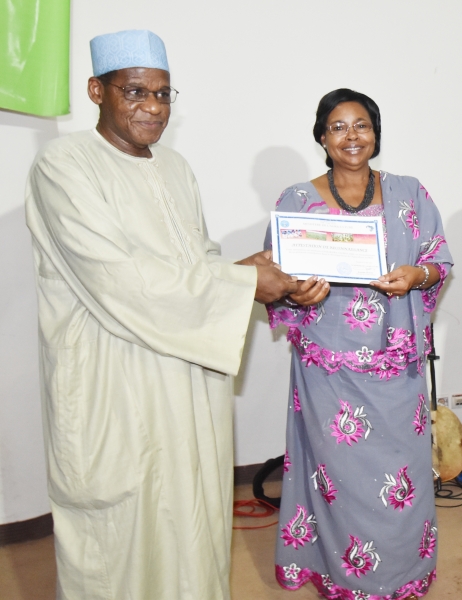 Dr. Juliana Rwelamira, Managing Director of SAA received a certificate of appreciation from Dr. Abdoulaye Hamadoun, General Secretary of the Ministry of Agriculture of Mali

March 2, 2017. The night was special for Sasakawa Global 2000 management and staff members. They were making sure that things are going as planned. Guests who were invited from different institutions are taking their designated seats in a hall arranged at Grand Azalai Hotel located in Bamako right next to the central rail station which connects the city to Dakar, Senegal.

Sasakawa Africa Association (SAA) have reached a milestone in 2016. It observed its 30th anniversary with farmers, partners and stakeholders through global events which attracted international media institutions. The country program in Mali was next in line to observe the event. They were prepared well. The guest list includes model farmers who were eagerly waiting to share their story to the audience. Our attention rested on them as they are pillars of SAA’s engagement in Africa.

A tall, charming guy who goes by the name Mamadou Diarré was among the model farmers. We requested to have a brief moment with him. He said ‘okay’ with a genuine smile on his face. The following were his thought about his relationship with the country program and the benefit he harvested throughout the years which according to him eighteen years. “I’m from Segou region in Mali. I used to be a tailor in my village. It was my only source of income. As a bread winner of the house, I was expected to fulfill my family’s needs. I struggled. When SG 2000 Mali commenced operation in my village, I didn’t hesitate to join and enjoy the fruit of the compelling project. I aspired to be a successful farmer. Farmers from our village came together and formed an association to cultivate millet and sorghum. We adopted technologies introduced by SG 2000 Mali. Through time, we began to see changes in our lives as our income grew. Recently we borrowed five million CFA franc from a credit association through a link created by SG 2000 Mali. It will pave us the way to become self-sufficient commercial farmers in the near future. I’m also a community leader in my village. I mobilized my community and built an elementary school in our village where my fourteen children and other kids from the area attend regular education. I have built a house in Bamako and my saving is improving by the day. I’m really thankful for SG 2000 Mali for everything they have done for me and my community.” He was all in smile when we requested for a photo shot after reminding him that his story will appear on SAA’s publications.

The event entertained different programs. Dr. Sokona Dagnoko, SG 2000 Mali Country Director welcomed participants and invited Dr. Juliana Rwelamira, Managing Director of SAA to forward her welcoming speech. In her informative note she says “for 30 years, SAA has led the effort to modernize technique and technologies for smallholder farmers in order to help them increase production and productivity. Along with our partners, we strived to help the farmer achieve food security, income security and hopefully soon enable African farmers go commercial. Our vision and mission aspire to see a more food secure Africa with increasing number of prosperous small commercial farmers. To date, SAA through its intervention have managed to work with a significant number of farmers. Recently, we conducted an external evaluation which found out that we have made a positive impact across the countries we operate in. I would like to salute the government of Mali for inviting SAA to begin operation starting from 1996. We specially thank Ministry of Agriculture for being with us all the way. Our programs in the country are well aligned with policies of the government and we share the goal set which is seeing a food secured Mali”

Dr. Abdoulaye Hamadoun, General Secretary of the Ministry of Agriculture made an opening remark on behalf of the Minister. He says “Through-out the years, SAA introduced technologies which helped to foster food security in Mali. ‘Dembanyuma’, an improved maize variety introduced to increase yield of smallholder farmers is worth mentioning. SG 2000 Mali’s intervention managed to establish farmer organizations which helped to bring about a collective change in the agricultural sector of the country. SG 2000 Mali is not limited to crop productivity. They have also introduced post-harvest equipment and storage facilities. Regarding market linkage, SG 2000 Mali helped to implement an annual cereal trade fair which eliminated involvement of a third party between farmers and traders in order to improve income of the smallholder farmers. In the capacity building side of the intervention, SG 2000 Mali trained extension agents through Sasakawa Africa Fund for Extension Education (SAFE) program. The ministry would like to congratulate SAA for marking 30 years of engagement in Africa.”

The colorful night had also displayed a breath taking; acrobatic cultural show. It was a special performance. The audience was impressed. Phone cameras were flashing from all corners of the hall targeted to capture the piece of magnificence.

The event come to an end with a certificate award ceremony handed to model farmers, partners, staff members and stakeholders who were in attendance.

The 30th anniversary celebration have marked the end of five years strategic plan executed from 2012 to 2016 and the commencement of a new strategic plan which extends from 2017 to 2021.

SAA along with its committed donors such as Nippon Foundation look forward to mark more milestones in the horizon. The strong bond created with African smallholder farmers will continue to flourish as SAA renewed its commitment for years to come.