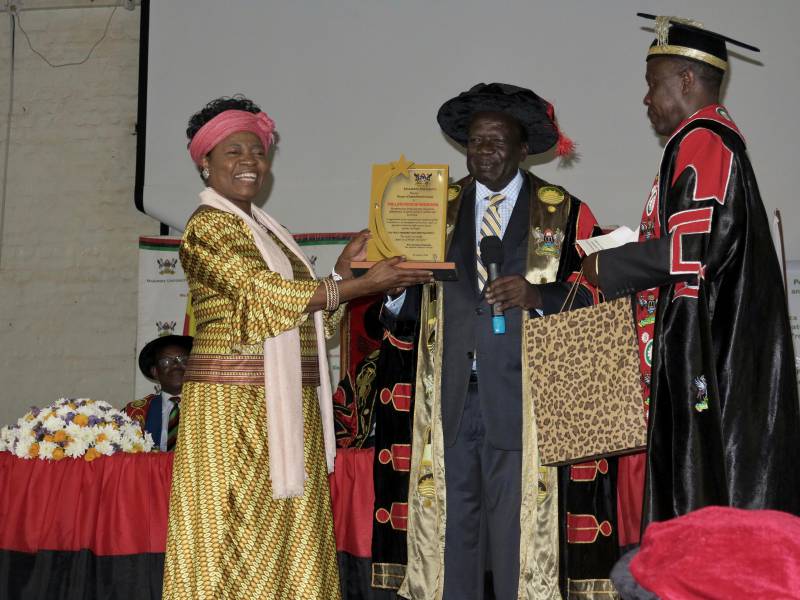 Professor Ruth Oniang’o, Chair of SAA board received the honorary doctorate degree on behalf of Ryoichi Sasakawa
1 of 2

The late Ryoichi Sasakawa, the founder and the former chairman of Nippon Foundation and one of the founding fathers of Sasakawa Africa Association (SAA), received Honorary Doctorate of Laws (Honoris Causa) from Makerere University on an event held on 9th of August, 2018.

In the presence of university community, distinguished guests and SG 2000 Uganda Staff, Hon. Professor Ruth Oniang’o, Chair of the SAA board, received the award on behalf of Ryoichi Sasakawa’s family and SAA. In her brief address, the board chair stated that the award is a great recognition by the university which pleased and honored Mr. Ryoichi Sasakawa’s family. She also recalled how Ryoichi Sasakawa took the initiative to help smallholder farmers in Africa with the late Dr. Norman Borlaug, Nobel Peace Prize Laureate and the former US President Jimmy Carter. She added that the initiative gave birth to SAA, also known as Sasakawa Global 2000 (SG2000), which changed lives of millions of smallholder farmers in Africa. She ended her speech by thanking Makerere University for the award.

H.E. Kazuaki Kameda, the Japanese Ambassador to Uganda, were in attendance and the Makere University public relations office quoted him saying Ryoichi Sasakawa’s philosophy, the world is one family; people are all brothers and sisters, was repeatedly aired on Japanese television stations and all his charitable activities embodied that vision.

Prof. Ezra Suruma, Chancellor of Makerere University congratulated Mr. Ryoichi Sasakawa and Dr. David Poplack (another award recipient for an outstanding contribution to the treatment of children with cancer and blood disease in the US and Sub Saharan Africa). He stated that both men demonstrated the willingness and dedication of moving out of one’s comfort zone and contribute to the betterment of the society. They managed to reach many and positively impacted their lives.

Hon. Vincent Ssempijja, Minister of Agriculture, Animal Industry and Fisheries (MAAIF) was quoted saying “I am greatly encouraged to see that Ryoichi Sasakawa whom I knew until his death in 1995 is being recognized by Makerere University. As a District Leader in Masaka for fifteen years, I worked with Sasakawa staff and I have seen them teach poor farmers the importance of planting quality seeds and multiplying them. As a result, I have seen them change the lives of farmers in the remotest parts of Masaka and Busoga districts”.

Established in 1922 as a humble technical school, Makerere University is one of the oldest and most prestigious Universities in Africa. In January of that year, the school, which was later renamed Uganda Technical College, opened its doors to 14 day students who began studying Carpentry, Building and Mechanics.

The College soon began offering various other courses in Medical Care, Agriculture, Veterinary Sciences and Teacher Training. It expanded over the years to become a Center for Higher Education in East Africa in 1935. In 1937, the College started developing into an institution of higher education, offering post-school certificate courses.