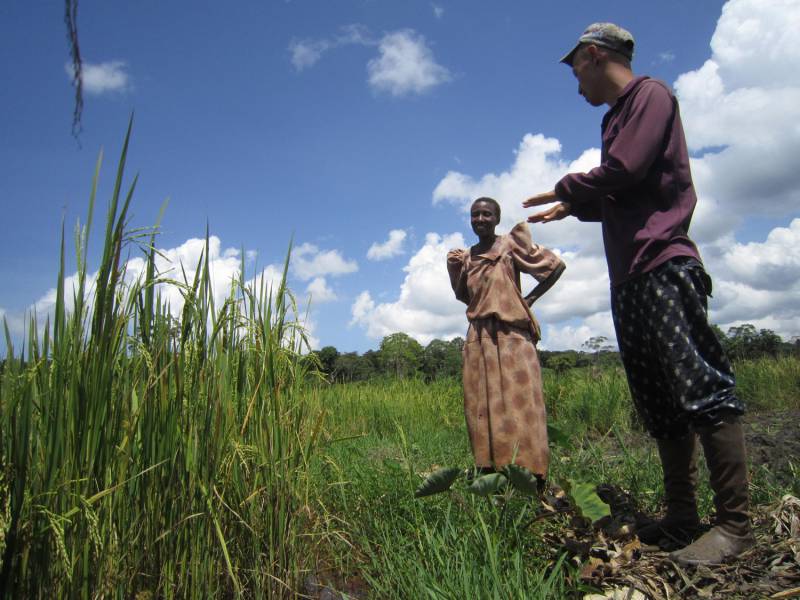 Ryoji Inaba is a young Japanese farmer and former Japan Overseas Cooperation Volunteer (JOCV) in Uganda, where he was assigned to work at the SAA Country Office for two years from 2012 to 2014. Since returning home to Aichi Prefecture and starting life as a farmer, he has worked on producing a wide range of organic farm products.

Ryoji was part of the panel discussion that took place during the SAA official TICAD VII side-event in Yokohama on 28 August, where he engaged with other young farmers and agriculture professionals and experts on the subjects of farming, entrepreneurship, and youth engagement in Africa and Japan.

Q. How did you come to work with SAA?

When I got accepted as a Japan Overseas Cooperation Volunteer (JOCV), I was assigned to the SAA Uganda Country Office, and my role was to work in the field where SAA Uganda operates. As soon as I arrived, SAA Uganda staff introduced me to farmers’ groups in the rural communities where I would be working. There were some groups that were really interested in rice production – around one in every two groups that I met. When I told them that I couldn’t give them machinery or equipment, some were very disappointed, but others were interested in my belief that I could share my knowledge on rice production technologies from Japan, combined with those introduced by research institutes in Uganda, in a way that was best adapted to the situation on the ground.
While the research institutes in Uganda had introduced the best technologies to me, they were not always practical enough to apply in the field. For example, the institutes had told me the optimum water level from the ground for rice production was 2-3cm, but it seemed impossible to maintain that water level in the field. If I told the farmers to use this level, they would not agree with me! So I started some experiments in the field to show the local farmers which water level was best for the entire process of production, from planting to harvesting.
There were three groups that I worked with in the end. Each group comprised around 10 people. As I felt it important to create an environment where farmers could keep learning from each other in a sustainable system, I asked them to nominate one person from each group who was really passionate about rice production as a focal point. This allowed me to focus on communicating with them, and their fellow farmers could then learn from that focal person using their field as a platform. Because I stayed in Uganda for only two years, I thought that was the best way to maximise what I was doing there.
In Uganda the primary languages are local languages, and the second language is English, which we used to communicate. For rice production, I didn’t need sophisticated words; I could just show them and use numbers, and that worked well.


Q. Was there anything about the SAA approach that particularly impressed you?

The majority of JOCVs are allocated to local governments in developing countries, but I was working with an NGO, so the biggest difference was that NGOs are really fast and flexible. When you decide to do something, you do it immediately, which suited my ideas about development projects.
There were two aspects that really impressed me about Sasakawa. The first was that Sasakawa doesn’t force local farmers into groups, so each group consists of members who are really passionate about agriculture. If local governments make groups, sometimes they don’t ask farmers whether they want to join, so there can be people who aren’t interested in agriculture, and it can be difficult to work with them. But because Sasakawa makes groups based on the passion of the local farmers, it was very easy for me to work with them. The second aspect was that SAA continuously supports local farmers, which really impressed me. The officers, the SAA staff, go to visit farmers often and they ask them about how their farming is going, and when the farmers report the situation they ask questions and give new perspectives. For example in Uganda, Roselline [Nyamutale], the Country Director, visits each village with staff from the office, and I think this support makes a huge difference.


Q. What lessons from your time working with SAA in Uganda did you bring back to Japan?

My time in Uganda allowed me to observe and realise so many important things in my own life. Firstly, I learned that access to information is very important for people to improve their livelihoods. Secondly, I felt that the lifestyle there is how human beings should be. In Japan, many people work like machines; in rural Uganda, the lifestyle was very simple. They wake up and have breakfast when sun rises, and they work when it is cool outside. They chat with their friends and spend time with their family during the daytime when it is hot outside. They prepare dinner before it gets too dark, and go to bed when they feel sleepy. Their lifestyle is not determined by clocks. Thirdly, I observed environmental problems in Uganda. For example, the destruction of forests and the environment was something I had never witnessed in my life when I was in Japan. Lastly, I learned that we don’t necessarily require electricity and gas to live, but we do need water; in Uganda I had to walk for a kilometre to get water.
So, when I came back to Japan, I realised that I need to protect the environment, protect water sources, and protect my lifestyle. Instead of spending my life just working, I want to spend my life producing food and protecting the environment.

Now I have two goals. Firstly, I’m thinking of expanding my rice field. I produce enough rice and vegetables to live on, but I also understand the need to earn some money. Just as people in rural Uganda are doing, I now produce rice and vegetables for my family, and sell the surplus to the market to earn an income.
Secondly, I want to do more to protect the environment surrounding my local community, especially the water source. I am doing this by cutting down conifers and planting more native hardwood trees in the forests in my local area. Conifers don’t produce any leaf mould, which is very important for forests for storing water when it rains, so by planting more hardwood trees which will store more water, I can contribute to protecting the local water source.


Q. Is there anything else that you’d like to talk about?

In Japan, the number of animals which are harmful to farmland, that eat agricultural crops, is really increasing. These include wild boar, deer, and monkeys. One of the reasons is that the ecosystem is being destroyed. After the Second World War, Japan planted lots of conifers for wood to build houses. What happened was that they ended up buying cheap wood from abroad, so they didn’t use the trees that they had planted. As a result, the number of conifers has increased dramatically and has harmed the ecosystem. The number of foxes has decreased, and foxes prey on animals like the baby boars that will eat crops, so we need more foxes. I’m now creating an environment better for foxes by cutting down conifers and develop grass field areas. Of course, human beings cannot control nature; it is better that we adapt to it.