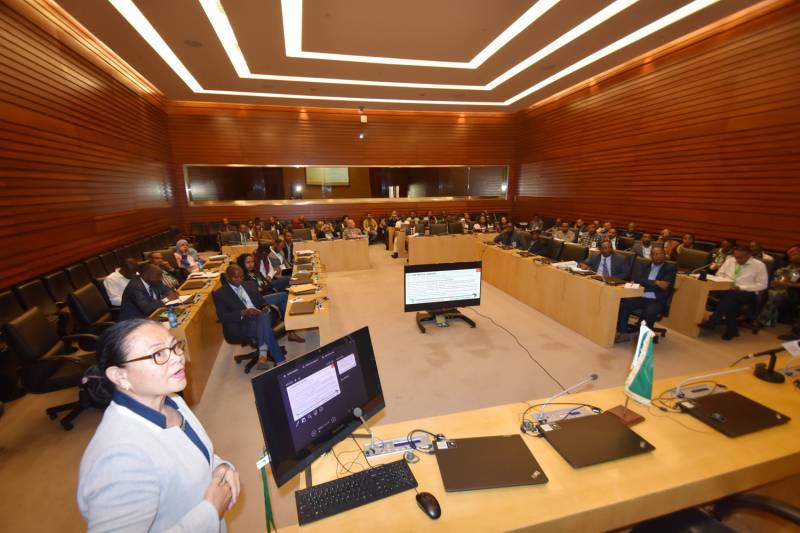 The African Union Commission (AUC) hosted one of Africa’s biggest postharvest event from September 17th to 20th 2019 in Addis Ababa, Ethiopia.
After what was remembered as a very successful event in Nairobi in 2017, Addis Ababa hosted the 2nd All Africa Postharvest Congress and Exhibition (AAPHCE) at AUC.


◆Welcoming Remark
The symposium was kicked off by a welcoming remark of Hon. Professor Oniang’o who warmly welcomed participants at the symposium. In her remarks she stressed on the necessity of postharvest loss reduction and value-addition by referring the 2014 1Malabo Declaration which committed African governments to halve the current level of postharvest losses by the year 2025. She highlighted the importance of preparing and consuming foods that are clean from chemicals such as Aflatoxins and noted that Africans must work together to make sure value-chain happens right in the farm. She concluded her remarks by applauding H.E. Abey Ahmed (PhD), Prime Minister of the Federal Democratic Republic of Ethiopia (FDRE) who is overseeing the green legacy initiative that aspires to clean Addis Ababa’s rivers and plant billions of trees across the nation.


◆Keynote Address
The keynote address was given by H.E. Dr. Eyasu Abreha. After welcoming participants he acknowledged the strategic partnership between Sasakawa Global 2000 (SG 2000) Ethiopia and the Federal Ministry of Agriculture in implementing various postharvest management programs that contributed to the food and nutrition security endeavor of Ethiopia. In his speech, Dr. Eyasu listed challenges that hindered growth of the agricultural sector of Ethiopia. He mentioned, among others; climate change, natural resource degradation, poor marketing infrastructure, unaffordable and inefficient agricultural value chain and low adoption of postharvest technologies. The way forward for African Agriculture, according to the State Minister, is the introduction of digitalization including production and postharvest technologies, fostering the private sector’s participation and tackling challenges of climate change. He also stated that the government of Ethiopia with citizens of the nation are striving to realize the national vision of enabling the country to be among middle income earning countries by 2025 through sustaining a rapid, broad-based and inclusive economy growth.


◆The Lead Paper
PHAP Director, Engr. (Mrs.) Leony Halos-Kim, presented the lead paper on SAA’s pillars of PHAP implementation, strategies, successes and challenges. This was followed by the experience- sharing of panel discussants on the adoption and implementation of improved postharvest system: Prof. Sani, Miko – Country Director of, Sasakawa Global 2000 (SG 2000)Nigeria expounded on country implementation of PHAP which generated support from both private and public sectors; Dr. Karima Babangida, Director of Extension Services, Federal Ministry of Agriculture and rural Development (FMARD) Nigeria explained how the collaboration with SAA influenced the ministry’s programs of adopting a value-chain oriented extension; and Dr. Dieudonné Baributsa, Manager, PICS Project, Purdue University, USA applauded the collaboration of SAA and the MoA for sustainable promotion and adoption of technologies.


◆Testimonies
Testimonies of the Leader of Edget (meaning growth in Amharic language) women agro-processing group and a private service provider (PSP) for threshing/shelling were also part of the symposium. The women were empowered through trainings received from SAA which enabled them to process better quality products that they supply in the local market and had increased their income. This has enabled them to develop their confidence and giving better provisions for the family. The PSP, had started his enterprise with a single machine and by working with SAA, had grown with 15 units of thresher/sheller within 2 years which provide regular services to farmers in his community and the neighboring villages, employed youth and school leavers, and providing him with a sustained income.


◆The Wrap-up
Dr. Mel Oluoch, Regional Director of SAA thanked panelists of the symposium for a successful and open deliberation with participants. He stated that the symposium was a platform to exchange ideas how to sustain the promotion and adoption of different postharvest technologies. The director mentioned the many recognitions SAA received from governments across Africa for the important role SAA is playing in improving livelihood of millions of smallholder farmers.
In their final remarks Dr. Mel Oluoch and Dr. Eyasu Abreha appreciated testimonies presented by the representative of the women group and the PSP.


◆Media Relations
A press release dispatched to the media welcomed prominent Electronic and Print media institutions to the symposium. Among these were Fana Broadcasting Corporate (FBC), a television station with nationwide coverage which produced and aired a news bulletin on prime-time news hour.