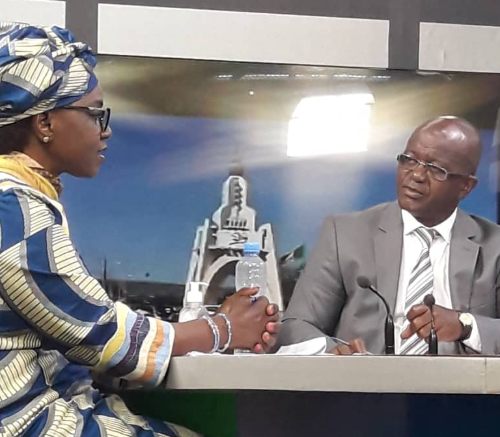 On August 10, 2020, SAA-Mali officially launched its pilot projects in the presence of 83 participants who came across all regions of Mali. This event took place at the Hotel Azalai Salam in Bamako, under the chairmanship of the Ministry of Agriculture represented by its Secretary General, Mr. Lassine DEMBELE. The National Director of Agriculture Mr. Oumar Tamboura, the rector of the University of Ségou - Dr. Soiba Diarra as well as the regional directors of the 15 regional directorates of agriculture in Mali were all present.

During this event SAA granted smart phones equipped with SIM cards to producers and extension agents as well as airtimes. In each smart phone were recorded six training modules (in Bambara and in French) on crop productivity improvement, post-harvest management and processing of agricultural products, as well as business development. The University of Ségou has also been provided by SAA with various equipment enabling it to implement online training through an electronic platform, also funded by SAA.

SAA pilot projects aim to ensure regular technology transfer and diploma training despite Covid19. It must be said that in Mali, this activity comes at the right time because it is in line with the government response strategy to the Covid19 pandemic where the government intends to intensify the use of ICTs in extension and agricultural advisory services provision.

After the official launch of the pilot projects by Mr. Lassine Dembélé and the handing over of ICT tools to extension agents, producers and the rector of the University of Ségou, participants were entitled to an orientation session on the use and the manipulation of smart phones and social networks such as WhatsApp, Youtube.

Convinced of the relevance of SAA pilot projects in the government's response strategy to the coronavirus disease, the Office of the Radiodiffusion and Télévision of Mali (ORTM), through its Actu Hebdo program, invited its Director Dr Sokona Dagnoko to a live debate on Sunday August 16, 2020 from 12:00 - 12:50 GMT. During this live TV show, Dr Sokona Dagnoko informed the audience about the international NGO Sasakawa Africa Association. The meaning of the word "Sasakawa", the history of the NGO, its field of intervention, its technical and financial partners, its 2019-2023 strategic plan, its extension models, its theory of change, its pilot projects for the mitigation of the impacts of covid19 on food supply systems, SAA achievements in Mali, the role of ICTs in agricultural extension, the current context of Malian agriculture in which the Covid19 occurred; and the involvement of youth, women and people with disabilities in SAA activities were all discussed during this TV program. The Country Director of SAA exchanged her contact information with the Deputy National Director of Youth; her co-guest of the TV show in order to establish a partnership on youth involvement in agricultural value chains. A video of this TV show was posted on You tube by ORTM and has been viewed 491 times as of August 18, 2020.