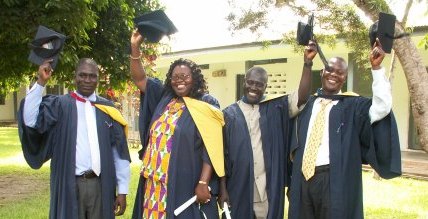 The symposium, entitled “Twenty Years of Extension Education in Africa: the SAFE Way”, will start at the International Conference Centre in Accra on 6 November with the official opening involving the Ghanaian leadership, a video message from former US President Jimmy Carter and a keynote address by Nigeria’s Minister of Agriculture and Rural Development, Dr. Akinwumi Adesina. Speakers will include Yohei Sasakawa, Chairman of The Nippon Foundation, which has funded the SAFE programme since its inception. Ministers of Agriculture from African countries, Vice Chancellors and Deans from participating institutions, and representatives from international organisations and NGOs, will be attending.

The second part of the symposium programme will be held at the University of Cape Coast (UCC), where the SAFE programme began in 1993 under the stewardship of the former Vice Chancellor, Professor Samuel Kwasi Adjepong – who is also playing an active role in the symposium.

With the second day being launched by UCC’s current Vice Chancellor, Professor Domwini Dabire Kuupole, panelists will lead working sessions on subjects such as ‘curriculum development and the value chain challenges’; ‘gender – breaking down the barriers for extension’; and ‘extension – the changing role of the private sector and the donor community’. A fourth session will face up to the ‘challenges of training mid-career extension staff’.

In this way, he says, “an increased number of mid-career staff will have opportunities to receive quality extension education locally”.

The SAFE concept has spread far since it was founded at UCC. Today there are 19 universities and colleges from nine African countries participating in the programme. By the end of 2013, the total enrolment, including graduates, will be 4,580.

Comments Deola Naibakelao: “multiply these results across our network of participating universities and it can be seen that we are making a major impact”.

The programme’s success is well summed up in the history of the Sasakawa operations in Ghana, “Setting the Grassroots on Fire”, edited by Joseph and Ida Kwarteng and launched in Accra on the first day of the Symposium.

Professor Joe Kwarteng is a former Dean and UCC Lecturer. Writing in the book he states, “It is unquestionable that the SAFE initiative has been a good thing for Ghana. Several hundred graduates from the programme are positioned in every district in Ghana working for the Ministry of Food and Agriculture or NGOs in various leadership roles. The programme, through the Supervised Enterprise Projects (SEPs), has also given lecturers greater exposure to the farming communities across Ghana and beyond for a better perspective of real-life agricultural and community development issues. More importantly, through the SEPs, farmers’ problems are being addressed throughout the country”.