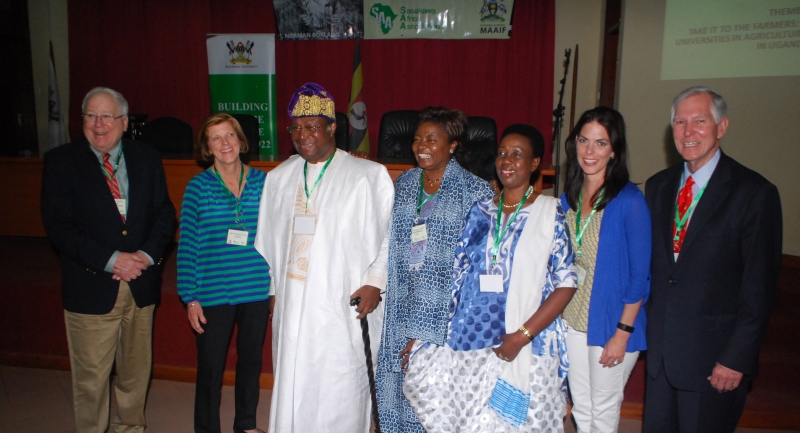 From 7 to 11 July, Uganda marked the centenary of the birth of Dr Norman Borlaug, Nobel Laureate and founding President of the Sasakawa Africa Association (SAA), with a series of events to emphasise the importance of agriculture to Uganda’s economy and the opportunities it offers to the youth in providing employment whilst stimulating skills and entrepreneurial activities. The events were timed to coincide with Uganda’s annual agricultural and trade show in Jinja.

‘Take it to the farmer’ (Dr Borlaug’s last words before he died in 2009), was the theme for the commemorative events which included four Sasakawa sponsored competitions featuring agricultural debates among schools in Jinja district; music, drama and dance for Jinja municipality schools; farmers, (small-scale and adopters) and an essay competition involving 60 schools in 16 districts.

“Dr Borlaug believed in young people as future farmers and as advocates against hunger,” commented Professor Ruth Oniang’o, Chairperson of the SAA.

The programme was launched on 8 July, at Makerere University with a symposium entitled ‘The relevance of universities in agricultural transformation in Uganda’. The Chancellor, Professor George Mondo Kagonyera, opened the symposium and visiting speakers included Dr David Norman, Group Vice President of Winrock International, and Dr Tim Chancellor, Director Capacity Strengthening and Learning at the Natural Resources Institute at the University Greenwich, UK.

A further symposium, ‘The Borlaug Legacy for Uganda’, was held at the Jinja Nile Resort on 10 and 11 July and was formally opened by Uganda’s Vice President, Edward Ssekandi. Among delegates were Tumusiime Rhoda Peace, African Union Commissioner for Rural Economy and Agriculture; Nicéphore Soglo, former President of Benin and Member of the Board of SAA; Yohei Sasakawa, Chairman of The Nippon Foundation, which funds SAA projects; Dr John Hardman, President and Chief Executive of The Carter Center; Ambassador Kenneth Quinn, President of the World Food Prize Foundation; Professor Ruth Oniang’o, Chairperson of SAA; Ms Jeanie Borlaug Laube, Dr Borlaug’s daughter, and his grand-daughter, Ms Julie Borlaug. A filmed tribute to Dr Borlaug by former US President Jimmy Carter was shown at the symposium. President Carter was one of the three co-founders of SAA – as was the philanthropist Ryoichi Sasakawa.

At the symposium, Ryoichi Sasakawa’s son, Yohei, renewed his commitment “to work side by side with the farmers of Africa to help improve their lives and ensure that no child will go to bed hungry.”

SAA has been working in Uganda since 1996, with small-scale farmers and the government extension services, to increase yields and improve rural livelihoods. SAA operates in 20 districts and is targeted to reach 100,000 farmers by 2016. SAA’s sister organisation, the Sasakawa Africa Fund for Extension Education (SAFE), has partnered with Makerere to enhance the professional skills of mid-career agricultural extension staff. SAFE is also chaired by Professor Ruth Oniang’o.

Visit our Facebook page for more pictures of the event.