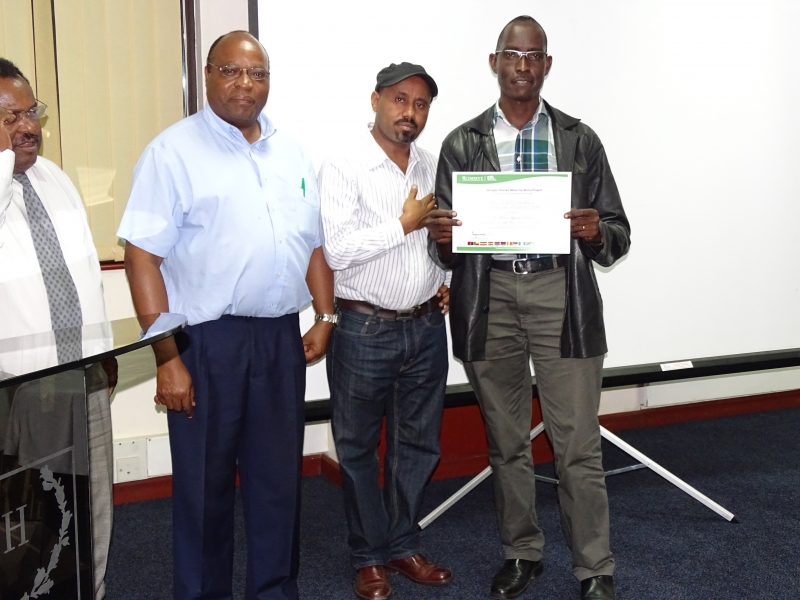 Sasakawa Global 2000 (SG2000) Uganda won an award from CIMMYT (International Maize and Wheat Improvement Centre) and IITA (International Institute of Tropical Agriculture) as the best NGO for the dissemination of the Drought Tolerant Maize (DTM) variety. Similarly, our Crop Productivity Enhancement Coordinator in Uganda, Hilary Rugema, won the same award as the best disseminator of the said technology from the same organizations. The award ceremony was held in Nairobi, Kenya, on 20th Feb. 2015.

Since 1997, SG2000 Uganda has been working with the National Agricultural Research Organization (NARO) and CIMMYT to produce and disseminate nutritious and stress tolerant maize varieties and Quality Protein Maize (QPM) to rural families in using gender-sensitive approaches.

SG2000 Uganda has also worked with maize breeders at the NARO and NASECO Seeds, as well as CIMMYT Ethiopia, to develop the new QPM hybrid later released as “Salongo” by NASECO Seeds, and to strengthen its seed production capacity. In order to ensure and sustain the quality of QPM seeds, Sasakawa Africa Association QPM regional program designed and launched a project led by the late Dr. Wayne Haag and coordinated by Hilary Rugema in collaboration with Chemiphar, Makerere University Crop Science Laboratory and NARO Animal Science Laboratory.

Hilary also linked together NARO, CIMMYT, SG2000 and seed companies through DTM varieties in Uganda by using SG2000 Farmer learning platform approach. Varieties such as LONGE 10H were promoted on the Technology Option Plots (TOPs) in all the SG2000 districts of operation in Uganda while LONGE 5 was promoted mainly in the Women Assisted Demonstrations (WADs) because of its nutritional value.

In addition to his work with SG2000, Hilary Rugema was elected as the national secretary for the QPM working group and helped disseminate both QPM and DTM varieties in Rwanda, Tanzania and Kenya through radio and TV programs, flyers, posters and journal articles.