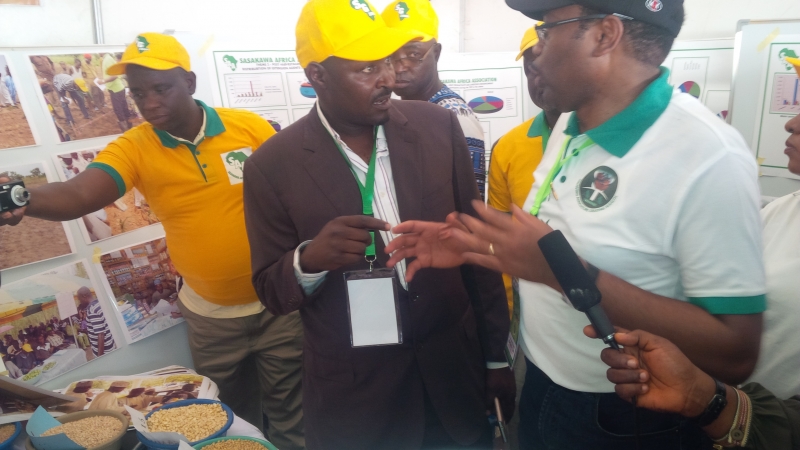 SAA-SAFE was selected and awarded the certificate of “Recognition of Your contribution to the Agricultural Transformation Agenda” by the Federal Ministry of Agriculture and Rural Development (FMARD)’s appointed committee at the AgriFest. AgriFest is an annual event where farmers, NGOs and other stakeholders in the agro-industry all over the country are invited to display some of their innovations and achievements. Farmer groups, institutions or individuals that excelled in their areas of endeavors are selected and publicly presented with certificates of recognition. At the ceremony, the Permanent Secretary of FMARD handed over the award to the SAA-SG2000 Nigeria Country Director - Dr. Sani Miko together with the SAFE Regional Coordinator - Dr. Mercy Akeredolu, recognizing SAA/SAFE’s long-lasting contribution to the country as well as to the FMARD-WAAPP (World Bank funded-West Africa Agricultural Productivity Program) project. The event was attended by the President and Commander-in-Chief of the Federal Republic of Nigeria, Dr. Goodluck Ebele Jonathan and the Honorable Minister of Agriculture and Rural Development, Dr. Akinwumi Adesina, who took time to visit our stand.

SAA- SG2000 Nigeria’s successes and recognition in the country have their root way back from the 1992; the introduced technologies by SG2000 brought farmers a breakthrough in yield of crops especially maize (from 1.8 tons/ha to 5.0tons/ha).

In February 2013, the FMARD, on behalf of the Federal Government of Nigeria (FGN), signed a Memorandum of Understanding with SAA, taking the level of collaboration even higher. This led to the formulation of the FMARD-SAA Extension Program in Nigeria referred to also as the FMARD-WAAPP. Within the context of the MOU, SAA and SAFE are responsible for:

a) Implementation and execution of the Agricultural extension Program of the Federal Government’s Agricultural Transformation Agenda (ATA).

b) Development of partnerships with national and international agricultural research institutions, extension organizations and any other agriculture related bodies that are active in testing, demonstrating, transferring of improved agricultural technologies and linking farmers to better/alternative markets;

c) Provision to the FGN/FMARD access to any technological developments that will lead to increased productivity and nutritional quality of food crops;

The FMARD provides the necessary financial, human resources and other logistic support as detailed in the log frames, work plans and budgets by SAA/SAFE. The project took off last year in 4 states under FMARD funding and 2 states under the WAAPP. While FMARD released $ 967,484 plus 6 vehicles and 60 motorbikes, WAAPP released $ 398,773 to SAA. The project activities in all the 6 states have been implemented as planned with positive results on farmers’ fields and communities, which was attested by the staff of FMARD that joined SAA staff. Some of the achievements of the first year of the project are:

• A total of 173 extension agents and 13,590 farmers have been directly trained on crop productivity enhancing technologies.

• Out of the 768 MTPs proposed, 664 MTPs were successfully carried out.

• Farmer groups appreciated the prompt supply of inputs to them, and have caught up with the recommendations given to them on the establishment of the Management Training Plots (MTPs).

• Farmers accepted and adhered to almost all the new technologies introduced, and are willing to continue to use the technologies even after the end of the program.

• The program enhanced cooperative activities and group participation in most farming communities, which had been almost non-existent in virtually all locations prior to the intervention.

• Two modern agro-processing centres (for rice & cassava) established in each of the 6 states and 12 others are on-going.

• The SAFE program in Usman Danfodio University Sokoto was established with the students admitted and all curriculum developed and in place.