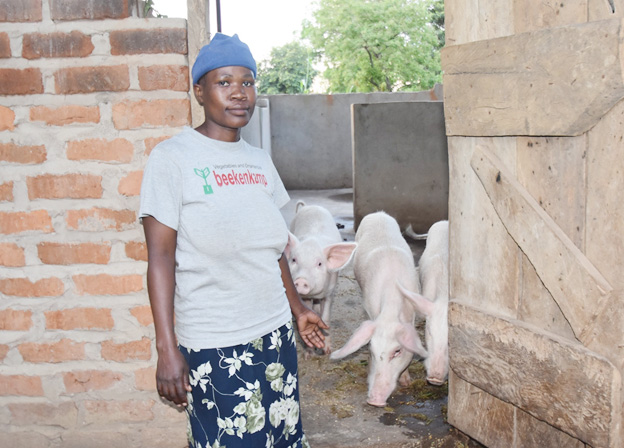 30 years old Kawumba Carol lives in Bukomolo village, Nandere parish, Kadama Sub County in the Kibuku District of Eastern Uganda. Her success started when she was sponsored by SG-2000 Uganda to go for a farm study tour in Masaka, a town in the Central Region of Uganda, west of Lake Victoria, under the Farmer Based Organizations (FBOs) project.

That trip to Masaka changed Kawumba’s life, as narrated in her story: “We were taken to a model farmer, a woman whom many admired. She had banana farm, cows, chicken, and pig farm. I picked a particular interest in the piggery enterprise, because they grow very fast and you recover your capital very fast. When we came back, I went and borrowed 115,000 Ugandan shillings (USh) from my membership farmers’ savings group and bought four pigs. The four pigs produced 30 piglets. I had a good breed male pig where people started to bring female pigs for mating. Whoever would bring a pig to be served, the owner has to give as a fee a piglet after the pig produces. During that time, I raised 11 piglets from the male pig. Then, the total piglets had come to 41, and fully grown. When they were going to produce for a second time, the first batch (30) I sold it off. Out of those sales, I got 4 million USh. The remaining balance of 2 million, we bought an acre of land. We were able to pay school tuition for the children. I have four kids, and I also look after as my own my husband’s two young girls from previous marriage; in fact, I’ve been able to send the eldest one to university paying her tuition. The second batch also got sold off fetching 3.5 million USh, the money going to build this permanent pig stalls. I was also able to buy maize bran to feed well the pigs. And, I was again able to pay school fees for all the kids. Life is good and the pigs keep on producing, this is the third batch now.” Besides, she uses the organic manure from the field as fertilizer to grow groundnuts in her garden. She has Turkeys and Ducks, seen roaming out in the yard.

The beginning of all these, according to Kawumba, was Sasakawa’s role to select her from her farmer group for training and acquiring business skills like selecting profitable enterprise, and being able to look at the different enterprises she could do, either in animal husbandry or crop, and to ponder which one would make more money. So, she was impressed by the piggery, a choice Kawumba Carol said with a confident smile: “never regret”, adding that “I am still expecting more and the sales will surely be higher!”