From ‘hopeless widow’ to a household full of joy: the story of Hellen Epuruge 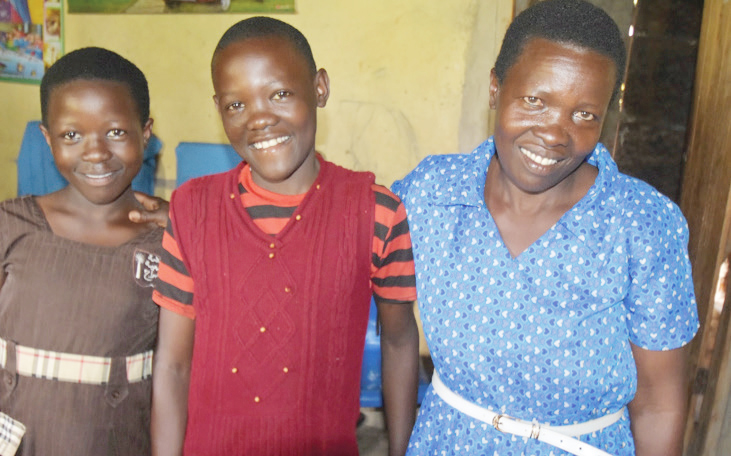 The now beaming household, Hellen with her two youngest kids

Nyarakoti Farmer Field School 1 is situated in Asinge C, Nyarakoti parish, in the Usukuru sub county of Tororo District. It consists of 30 members, 18 of whom are women. Its enterprises include 6 acres of rice production, 4 acres of groundnuts and 8 acres of maize. Formed in 2012 and fully registered, it initially received Ugandan Shilling (USh.) 10,000,000 from SAA in Uganda under the Farmer Based Organizations (FBOs) project, which was invested in ‘farming as a business’ and paid back in one year. Profits have been reinvested in the school’s ongoing enterprises. The group members received training in production, postharvest handling and marketing, and were educated on the benefits of farming as a business.

Hellen Epurege is the group secretary. She is a widow who said she had lost hope after the death of her husband, leaving her as the sole provider for six children. After attending Bugiri Agri-business and Institutional Development Association (BAIDA) and becoming involved with the Nyarakoti group, her life changed. Telling her story, Hellen said: “When my husband died, he was the one providing for the family. I lost hope; I was miserable. Many people didn’t think I would last a month as a housewife with 6 children. In 2014, our group was invited for training in BAIDA, Bugiri, which was provided by SAA Uganda’s Mr. James Murangira.

Acting on his advice and guidance, my fellow group members and I began practicing what we had learned. These new techniques, including postharvest handling and the concept of farming as a business have completely changed my life. When my husband died, two of my children had just joined S1 (secondary school) in Iganga town. This could have been the end of their education, but instead they have just started their final O level (post-secondary school) year and plan on training as teachers. My last born, who was in P1 when her father died, is now in P5; and my second last is in Manjasi high school, a very good school in Tororo.” She continued: “Since my training from SAA, food security is not a problem and my family are eating well. Now I am invited to attend seminars, and I have even traveled to do exchange visits in Nairobi. My children always report to school, and people in the community ask me to share my knowledge with them so they can improve their lives as well. My family and I are a testament to SAA and what can be achieved through hard work and proper training. “Before I felt there was no hope for me. Farming has turned my life around, and it is all because of SAA. I cannot thank them enough!”