TONNY OYER: A story of success with the Sasakawa Africa Association 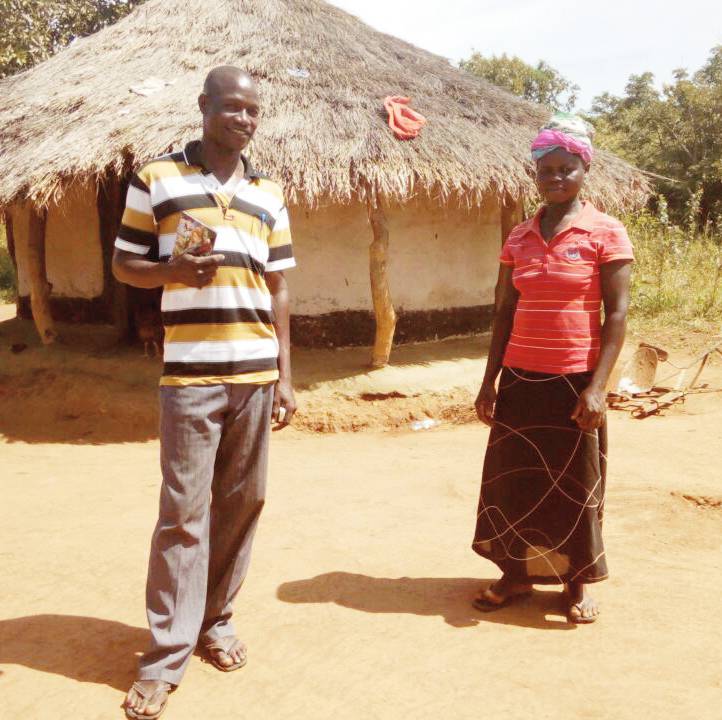 Before and after: Tonny and wife standing in front of their old house (left), and the new house (right) they have been able to build thanks to the Sasakawa Africa Association.

Tonny Oyer is a 39 year old resident of Awila Parish, Akokoro Sub County in Apac district, Uganda. He is married and has four children. His father passed away early in his life, and his mother some years later, leaving him with the responsibility to take care of his six siblings.

In 2005, he dropped out of secondary school to obtain a certificate in woodwork and carpentry. After completing the course he opened a workshop, but was unable to make enough money to support his family. He decided to turn to farming, as he owned a large area of land that was left to him by his father. Such was his success, Tonny is today a household name in his village. However this success did not happen overnight. It took hard work, putting his knowledge and skills into practice.

In 2013, the Sasakawa Africa Association started implementing the Growth for Uganda Project in Apac and Dokolo districts. The goal of the project is to increase farm productivity and the household incomes of smallholder farmers. Farmers organized in groups would host demonstrations and receive practical training on good agriculture practices across the value chain. The Awila Integrated Farmers’ Association is one of the groups that benefited from the project. Unsatisfied with the output from his own farm, Tonny asked to join the group, and was accepted. His expectation was to get help on how to improve his production.

One of the group members was selected to host a demonstration that season, and was provided with the following inputs from SAA: maize seed (Longe 5); fertilizer (DAP and Urea); and a pesticide. With the help of the Community Based Facilitator (CBF), a Women Assisted Demonstration plot (WAD) was established. The demonstration was well managed and the crop performed well. Tonny also observed a Community Variety Plot (CVP) that was established by SAA in another village in his parish. Again, the crops on the demonstration looked healthy and produced high yields for the plot size. Taking what he’d learned, Tonny received 10kg of maize- Longe 5, an improved seed variety, on credit from the Commodity Association Trader (CAT). The CAT agreed that he would pay after the maize was sold. Before planting, he made sure to use the correct spacing of 75cmX60cm, which he had learnt from the demonstration plots. He also employed other practices he had observed, including keeping his field free of weeds.

Tonny has experienced excellent results, with significantly improved yields from his farm. He has since been able to finish building his house, and recently completed the roof. Thanks to the Awila Integrated Farmers’ Association, he has been able to find a market for his produce through their collective marketing efforts. He also benefits from easy access to credit when the need arises. The group members have healthy competition amongst themselves, which has furthered their progress. Members have acquired assets such as livestock and motorcycles, and many of are building permanent houses for the first time. Tonny said he is grateful to the Sasakawa Africa Association for providing him with opportunities to learn. Without the knowledge and skills he acquired from the demonstrations, he would not be where he is today.