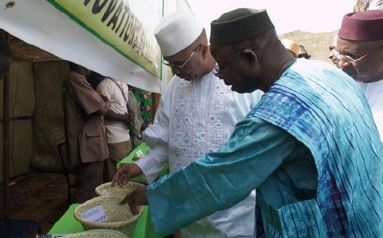 The City of “Balanzans”, known as Ségou, hosted the National Cereal Stock Exchange Fair from 10-11 February, 2018. The event was chaired by the Minister Commissioner for Food Security of Mali,Mr. Oumar Ibrahima Toure. The Sasakawa Africa Association, as a founding member and the Ministry’s partner organization, mobilized 10 Farmers’ Organizations through Production, Postharvest and Trade Centers (PHTC) for participation.

Since its inception in 2006, on the initiative of the President of the Permanent Assembly of Agriculture Chambers, and its partners including l’Association Malienne pour la Sécurité et la souveraineté alimentaire (AMASSA) - Afrique Verte Mali, and SG-2000 Mali, the National Cereal Stock Exchange has become an important instrument for promoting cereal products in Mali. To this end, it aims to bring together cereal offerings at producer level with buyers, not only from Mali but also from other countries in the sub-region of West Africa. It is a powerful instrument for food security, facilitating the sharing of information between areas of high production and those with deficits.The exchange also demonstrates the progress of cereal markets in terms of price setting.

Over the last 11 years, 271 contracts worth CFA 11.8 billion (over 22 million USD) have been ratified at the Fair.Farmers supported by the Sasakawa Africa Association attended from several PHTCs including Kolonto, Monzomblena, Fanidiama, Niamala, Siranikoto, Dacoumani, Selingue, Goloninasso and Kiffosso. In total, they brought offers in excess of 5,931 tons of cereals, comprising 3,005 tons of rice, 2,863 tons of maize, 35 tons of sorghum, 28.5 tons of millet and 0.5 tons of fonio.

These two trading days saw the signing of a dozen sale contracts for the cereal stocks, resulting in turnover of over CFA 300 million (over half a million US Dollars). The stands were visited by the authorities (including the Minister, President of the Assemblée Permanente des Chambres d’Agriculture du Mali (APCAM), Governors and Senators), as well other participants and visitors SPECIAL EDITION of the stock exchange. This was an excellent opportunity for SAA in Mali to communicate its message to a wider audience.

This 12th edition of the National Cereal Stock Exchange Fair was a success for all participants. In total, it offered the perfect opportunity to put on the national and sub-regional market more than 53,264 tons of cereals of which 12,303 tons found an offer of purchase; 18 contracts were signed for a quantity of 5,960 tons for a turnover of CFA 1,511,980, 000.

Si a Sacko, a technical adviser at APCAM said during his visit:“The name of SG 2000 in Mali is associated with the maize Dembanyuma and NERICA rice. It was SG 2000 that first brought the Dembanyuma variety to Mali. APCAM’s current president was the first adopter of the variety in the country, harvesting more than 4 tons per hectare in the first year. Since the beginning of the National Cereal Stock Exchange, SG 2000 has been a valued partner".

Dr Nouhoum Sangaré, SAA’s Thematic Director for Public-Private Partnerships and Market Access in Mali, said the 12th edition of the cereal stock exchange was a success. “I am very impressed with the participation of our producers in this great exchange event, which enabled them to compare their performance with one another, and also to learn from each other’s activities. Through the stock exchange, ; updated information on the cereal market is communicated to all participants, and their access to market is easier”.

Diakaridia Ouatara, from the PHTC of Fanidiama, said: “I am very pleased to participate in this event with the support of the Sasakawa Africa Association. Our PHTC has brought an offer of 380 tons of maize. We have made contact with buyers both from Mali and elsewhere (Burkina Faso and Cote d’Ivoire). Moreover, through the event we have developed networks with other producers and groups from all over Mali. I sincerely thank SG 2000 for the great support it has given, and continues to give us”.