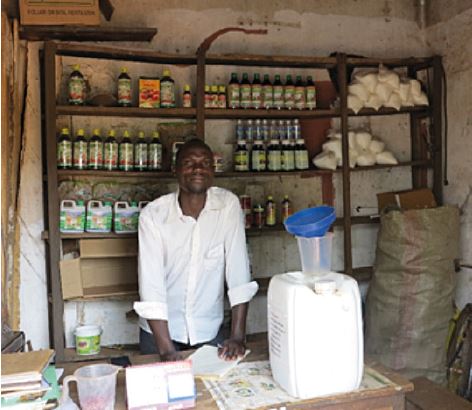 Katamba in his agro-input shop

29 year-old Katamba is a farmer from Bulera sub-county, Mityana district, in the Central Region of Uganda. He is married with three children. He started working with SG 2000 Uganda in 2015, as a host farmer under the Nabumbugu Youth Development Group, made up of 30 members (15 men and 15 women). He was motivated to join the group in 2014 after being impressed by the outputs from a maize demonstration.

In the same year that he joined the group, he was selected to host a maize demonstration Technology Option Plot, and in 2016 he was appointed as a Community-Based Facilitator (CBF) to train farmers in his community.

In addition to the knowledge and skills acquired through his duties as a CBF, Katamba has also benefited from new experiences and opportunities that have greatly expanded his networks. Other organizations often look to CBFs as focal points in local communities. These have included Akorion, CAFÉ-Africa, and NARO.

Over the years, Katamba observed that the farmers in his community, particularly those he was training, had issues with accessing agroinputs.

There was only one agro-input shop in the Bulera subcounty, and sometimes what the farmers wanted was not available, so Katamba decided to bring the inputs to the farmers. In the second season of 2017, he served 200 farmers with different inputs - mainly seed and chemicals. Katamba reported that “it is easy to train the farmers when one had a sample and in a way, it was an advertising strategy”. He operates demonstration gardens to showcase his products, and also offers after-sale services, visiting farmers’ fields to see how the products are performing. With the profits he made in 2017, he secured a plot of land to construct a better house for his family.

Since the demonstration he hosted in 2016, Katamba’s fields have been a popular attraction. He reported that farmers would ask him about the kinds of chemicals he was using on his garden. He used to say: “You buy the required chemicals and I’ll spray them for you the way I did on mine” – an offer that soon turned into a fully fledged spraying service provision. Katamba charges UGX1000 for every emptied chemical pump, and UGX 1500 for every emptied foliar fertilizer pump. Last season he served about 100 farmers with an average of three pumps per person. In a season, he earns an average of UGX 200,000, and has two pumps which he bought at UGX 60,000 each. He plans to employ two more people in order to increase service provision.

Katamba is now proposing saving plans to his group, whereby farmers wanting inputs can register and access those inputs from the shop. Farmers would be granted a loan from the Village Savings and Loan Association (VSLA), with the funds directed to the input shop, allowing the farmer to access the required inputs and service the loan thereafter. Members are currently consulting on the plans.