Lop Ape: A farmers’ group for the love of one another 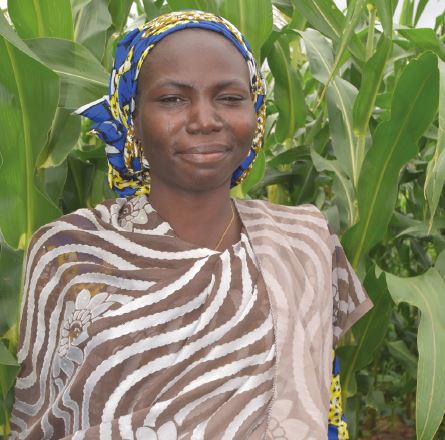 Christiana Jeron Buba is from the Pokwangli II town, situated in the Tungo District of the Kaltungo Local Government Area of Gombe State, Nigeria. She is an active member of the Lop Ape farmers’cooperative group. ‘Lop Ape’, in the local parlance of Hausa, means“a farmers’ group for the love of one another”. The group has a membership of 20 people, 15 of whom are women. They mainly cultivate maize, as well as cowpea and rice.

Christiana said that, thanks to Sasakawa Global 2000 Nigeria’s(SG 2000) promotion of crop enhancement and productivity technologies, the Lop Ape group had adopted new techniques in maize cultivation. These techniques resulted in a yield of bigger and stronger cops than was produced when traditional practices had been applied.

“For example,” said Christiana, “there is a big difference in fertilizer application. In the local practice I used to do – or we used to do as a group – we would only apply fertilizer to the top soil. But now, we dig deep and bury the fertilizer beneath the soil. That is why the penetration of the fertilizer is higher, and the absorption is also higher than when using our previous technique. That’s also why it has produced two-to-three cobs per plant, compared to just one before.”

Asked about the progress made with the newly adopted technologies, Christiana said that she was “really happy about this

type of technological practice”. She further underscored the benefits that techniques promoted by SG 2000 have brought to her life and her family: “I now have an improved source of income generation. I am able to settle my children’s school fees, unlike before. In general, this practice has increased the level of income earning amongst all of our group members.”