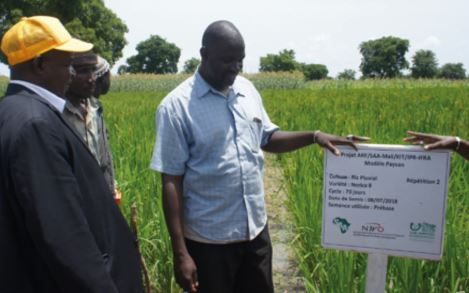 As part of the partnership between SG 2000 Mali and the National Directorate of Agriculture (DNA), national supervisory field visits are held to identify and document achievements in each of the four intervention areas where SG 2000 works: Kayes,Koulikoro, Sikasso, and Ségou. By recording these successes, they can be included in national annual reports and other databases, highlighting the successes of SG 2000 interventions, technologies,and innovations, and generating further adoption and buy-in from the government.

Since 2017, SG 2000 Mali has focused its interventions on the Production, Postharvest and Trading Center (PHTC) model,using a value chain approach. For this purpose, SG 2000 has established 12 PHTCs across the four focus regions. Each PHTC is composed of 10 villages, which include one central village and nine satellite villages. Each village is represented by at least one Farmers’ Organisation (FO) primary cooperative. These primary FOs are managed at the central village level into a union which leads all the activities of the PHTC. This way, the different villages collaborate to lead the activities intended to improve productivity, postharvest handling and marketing, thus intervening at each link of the value chain.

Last year, National Director of Agriculture Oumar Maiga led one of these supervisory visits to the four intervention regions. He visited five of the 12 PHTCs established by SAA in 2018, in addition to a number of foundation seed production test plots established in farmers’ fields and on-station. These plots were created under the framework of the Food and Business Applied Research Fund (ARF) Project, implemented by SG 2000 with the financial support of the Netherlands Organization for Scientific research (NWO).

The supervisory mission also visited the University of Ségou and the Agricultural Training College of Samanko, both of which benefit from the support of SAA through the Sasakawa Africa Fund for Extension Education (SAFE) programme for human resource capacity building. The Director and his team were also on hand to witness productivity improvement activities through Community Demonstration Plots (CDP) for both men and women; Climate Smart Village (CSV) plots and Community-Based Seed Multiplication plots (CBSM); postharvest and agro-processing activities through the application of postharvest equipment and hermetic storage tools; and Farmer-Based Organisation (FBO) activities through collective marketing, contract farming and warrantage.

At the end of his visit, Mr Maiga expressed his satisfaction, praising SAA for establishing “many useful things such as the PHTC model.”“These are common actions for the benefit of the community and especially in relation to the applied technologies, which allow for increased agricultural productivity. Mostimportantly, what especially amazed me was the foundation seed production by farmers as part of Sasakawa’s ARF Project,supported by the NWO. This is the first time I’ve seen this in Mali. This activity was reserved only for research centers. But everywhere we visited we saw farmer groups that manage foundation seed production plots.

“We’ve seen women doing production of foundation seed for cowpea, groundnut, millet, rice and maize. These are things that I particularly appreciated. Then I saw that there was a strong involvement and a particular incentive for women around all activities implemented by SG 2000. Practically half of the participants are women, who are very active in learning production technologies, taught and promoted by SG 2000. I also saw some hermetic storage tools that I have never seen before – motorized seeders, multifunctional seeders – all popularized by SG 2000 Mali.”