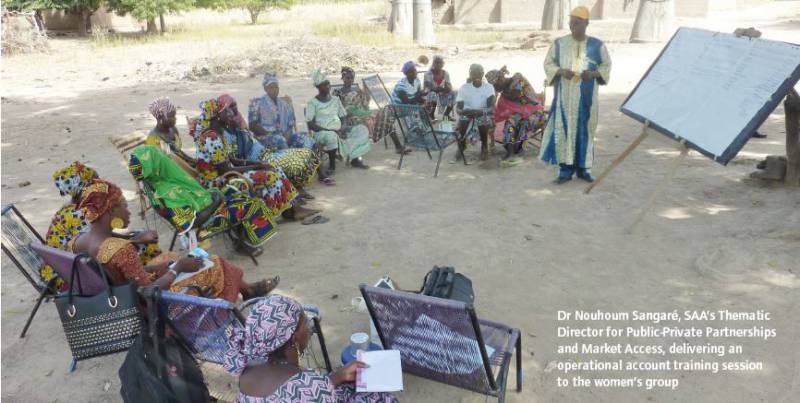 The Monzonblena Postharvest and Trading Center (PHTC) boasts a membership of 10 villages, and is located south of the Malian capital, Bamako. In 2017, SAA identified the villages, including Foloda, which has a population of 450 and relies on subsistence agriculture as its main source of income, to follow a needs assessment survey organized in collaboration with the national agriculture sector of Dioïla.

During the 2018 cropping season, the group established a testplot of 0.25 ha in three replicates, under the technical assistance of an SAA/Applied Research Fund (ARF) project and national agricultural sector agents.The group’s results speak for themselves, and are a testament
to the initiative and hard work of its members. From an initialinvestment of 96,000 FCFA ($192), the group made a sale of 300,000 FCFA ($600) – an impressive gross profit margin of 204,000 FCFA ($408) on less than a hectare of field, maintained manually by the women.

Coumba Sidibé, who led the group, said: “As a result of the operational account training that the project has given us, we have found that production of groundnut foundation seeds is very profitable. We have put this amount of money into the account of the group”. Reflecting on the benefits of reinvesting their profits, Coumba adds that “members can now borrow money to carry out other income generating activities. We can say that this foundation seed production project has been an opportunity to provide us with resources to improve our living conditions. We now afford food for our children, care for them and send them to school. We will continue with this activity.”