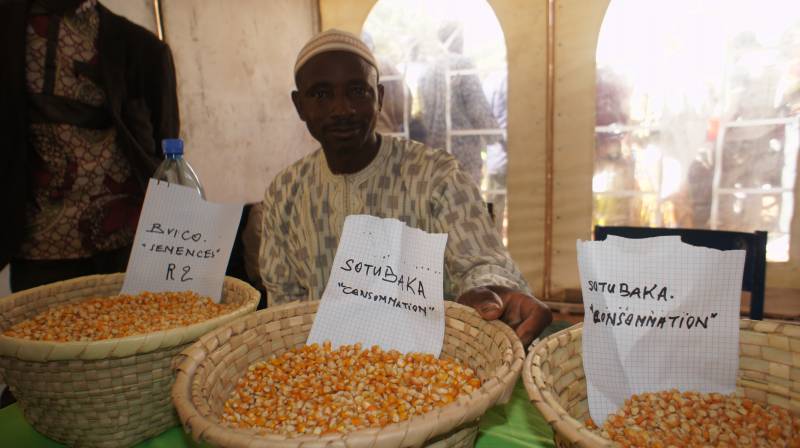 The National Cereal Exchange Fair, which has over the years become an essential event in Mali for the promotion, and exchange of, grain products, held its 13th edition in Ségou from 14-15 February. The Exchange Fair, which was first launched
in 2006, was the initiative of the President of the Permanent Assembly of the Chambers of Agriculture of Mali (APCAM), in partnership with SG 2000 Mali and AMASSA Afrique Verte. In addition to providing smallholder farmers access to a larger
market, the Fair also plays a valuable role in allowing for the
sharing of information between areas of high production, and those with lower crop productivity.

As part of the SAA Postharvest and Agro-Process Extension, Postharvest and Trading
Centres (PHTC) are established in order to demonstrate market-driven innovations, with the aim of ultimately developing into self-sustaining farming enterprises managed by the Farmer Organizations. An SAA project, funded by the Food and Business Applied Research Fund (ARF) which aims to develop economically viable models of foundation seed production for crops, invited two seed producers to promote the achievements of the project at the latest fair.

Oumar Mallé, one of the seed producers and a member of the Dacoumani PHTC, said: “The Cereal Exchange Fair is the meeting place of all the actors around cereals: from suppliers of inputs to producers as well as traders from all over the country, as well as some neighboring countries such as Burkina Faso, Niger, Ivory Coast and Senegal. Participating in this trade fair was a great opportunity for exchange and experience for me and for our cooperative. This is our first time participating in this trade fair, and we have made offers mainly for seeds.”

Reflecting on the positive impact that that exposure to larger markets has had, Mallé added: “I thank SG 2000 Mali very muchfor giving us, through the ARF project, the opportunity to participate in this important cereal trade fair.”

Diakaridia Ouattara, an agricultural producer from Fanidiama, also took part in the Exchange Fair, in which he presented the maize supply available at his PHTC. “This year we brought an offer of 902 tons of maize to the stock market. We brought some
samples that we exhibited at the booth that SG 2000 offered us. To this end, I had the opportunity to exchange contacts with more than a dozen traders, poultry farmers and processors during these two trading days.” Having previously participated in two Cereal Exchange Fairs, Ouattara recounts an example of how the annual event has enhanced his experience with sellers “Last year, a trader from Bamako contacted us to buy 120 tons of maize. He took our phone number, thanks to the organizers of
the Exchange Fairs, to call us to make his order. He sent us the money through our bank account and sent the trucks to pick up his stock. We did not even meet each other personally at all. This is a new type of market that we did not know before
SG 2000.”