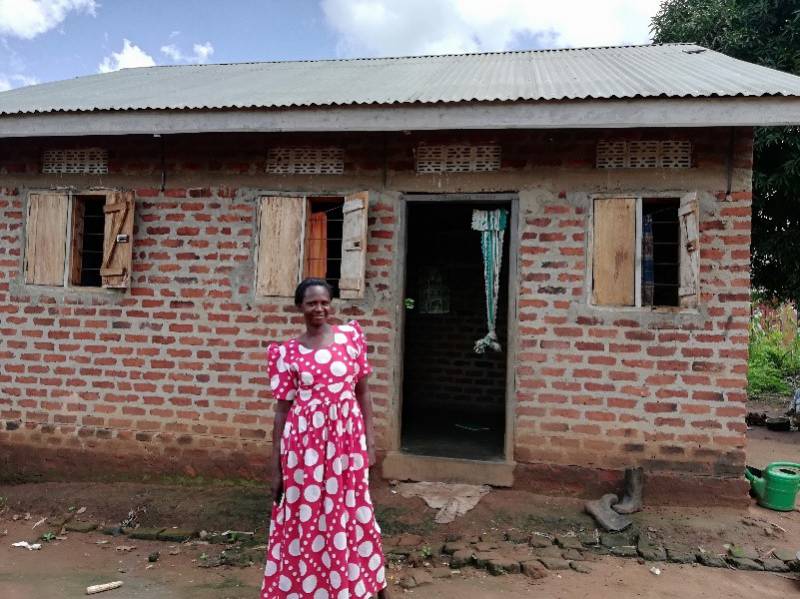 The Bulamu Tweweyo Farmers’ group was recently selected to participate in the Vegetable Oil Development Project (VODP), launched in 2016 by Sasakawa Global (SG) 2000 Uganda, in partnership with the Ministry of Agriculture, Animal Industry and Fisheries (MAAIF) and the International Fund for Agricultural Development. The project aims to alleviate poverty among rural communities by increasing production of vegetable oils, primarily soybean and sunflower oil, through the introduction of new technologies and good agricultural practices.

Sarah Mutesi, a 46-year-old farmer based in the Kamuli district of Uganda, is a member of the Bulamu Tweweyo Farmers’ group. As part of the VODP, Sarah and her fellow group members received training on a range of subjects, including production processes and marketing. The group learnt about fertilizer application techniques, identifying and planting seeds, weeding, and postharvest handling methods – from drying on tarpaulins to storage systems.

Reflecting on the level of crop yield following SAA’s training, Sarah says “In the first season of 2017, from March through to July, I planted one acre of soybean. Due to the long dry spell I only harvested 500kg, but as I had applied the post-harvest handling practices recommended by SAA, my grain was clean and free of debris, which gave my produce the higher price of $0.68 per kg, compared to what other farmers were receiving for their soybean: $0.46 per kg.”

The second season was also marred by dry spells, but climate-smart technologies and effective post-harvest and handling methods introduced by SAA helped empower farmers to tackle challenges which resulting from unfavorable weather conditions. “In the second season, from August through to December, I planted half an acre as I had realized that adopting farming practices introduced by SAA, such as harvesting and drying on tarpaulin, enabled me to maximize production from a small field,” Sarah explains “the long dry spell meant I only harvested 320kg, but through providing higher quality produce, I generated $81.74, which I put towards starting the construction of my permanent home.

“SAA helped me overcome my financial problems and earn a better income, enabling me to build a better house in which my family and I moved to. They are well-fed and healthy, and I now understand how the market works and am aware of the need to produce and supply quality products to the market. I present my heartfelt thanks to SG 2000 Uganda for helping me grow.”