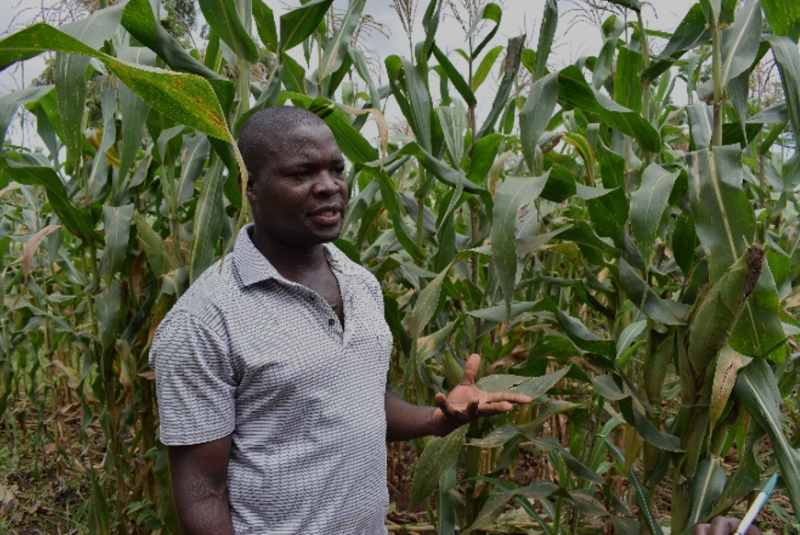 Steven in his maize field

Steven Sseruma is a 27-year-old smallholder farmer, engaged in service provision, from the Nakaseke District of Uganda. Owing to training administered by SG 2000 Uganda, Steven was selected as a community-based facilitator in 2018, and was tasked with training farmers in his community on how to improve their farming methods. Through the private service provision extension model, SAA supports the capacity-building and development of youth farmers along the agricultural value chain, which covers Crop Productivity Enhancement (CPE), Postharvest handling and Agro-processing (PHAP), and Business Development (BD).

“In 2018, SAA organized a field day in the Nakaseke sub-county to demonstrate post-harvest handling equipment,” Steven explains. “I was impressed with the motorized maize sheller and, given that the services for shelling were in high demand in my community, I paid a deposit of $273.97* to secure my own. In the same season, I was engaged in the maize shelling business and was able to recover the cost of the machine.

“As I become known in my community, the number of customers and bags of maize I shell has increased significantly. At the end of each season, I earn a profit of $547.94. In addition to the maize shelling service, I provide extension advisory services to farmers. I offer competitive prices to farmers for their produce (maize and beans) so that they are not cheated by middlemen.”

Despite working on a small field, Steven was able to maximize his productivity due to the knowledge, skills and technologies promoted by SAA. Consequently, his maize production has increased from one to two acres per season: “My income has significantly increased which has enabled me support my family and acquire a plot of land. I am grateful to SAA for the capacity development and linkages which have empowered me to become a youth entrepreneur, as well as an inspiration to others in my community.”