Charles Dickens Omara; A Feat in Mentoring Youth into Entrepreneurs in Uganda

When Charles Dickens Omara was selected by the District Agricultural Officer to participate in a Youth Business Clinic organized by Sasakawa Africa Association (SAA) in 2020 under the program funded by The Nippon Foundation (TNF), he had no idea that there would be competition and a cash prize of one million Uganda Shillings ($283) to be won.

Nevertheless, he took on the challenge, and his hard work paid off. He emerged the winner of the cash prize and now runs a thriving poultry business.

Charles Dickens Omara is a 27-year-old farmer and student of Bukalasa Agricultural College from Atodi village, Lira district.  He has transformed his livelihood and that of his family through poultry farming and has diversified to piggery, apiary, and cuniculture.

Youth unemployment is a major problem in Uganda.  The unemployment rate for young people in Uganda for persons between the ages 15–24 is 83%. About 400,000 youths are released annually into the job market to compete for approximately 9,000 available jobs according to a report by the Advocates Coalition for Development and Environment (ACODE).

Uganda has the youngest population in the world, with more than 77% of its population under 25 years of age; 80% of whom live in rural areas.
By training youth in business management, SAA empowers youth like Charles to become entrepreneurs in a country where the unemployment rate is projected to trend around 2.30 percent in 2022 and 2.00 percent in 2023 according to econometric models by Trading Economics, an online forum that provides its users with data on economic indicators and financial markets.

“Most of the participants had great business ideas and they were confident when pitching to the panel; I had no idea that I would emerge the winner,” says Charles. 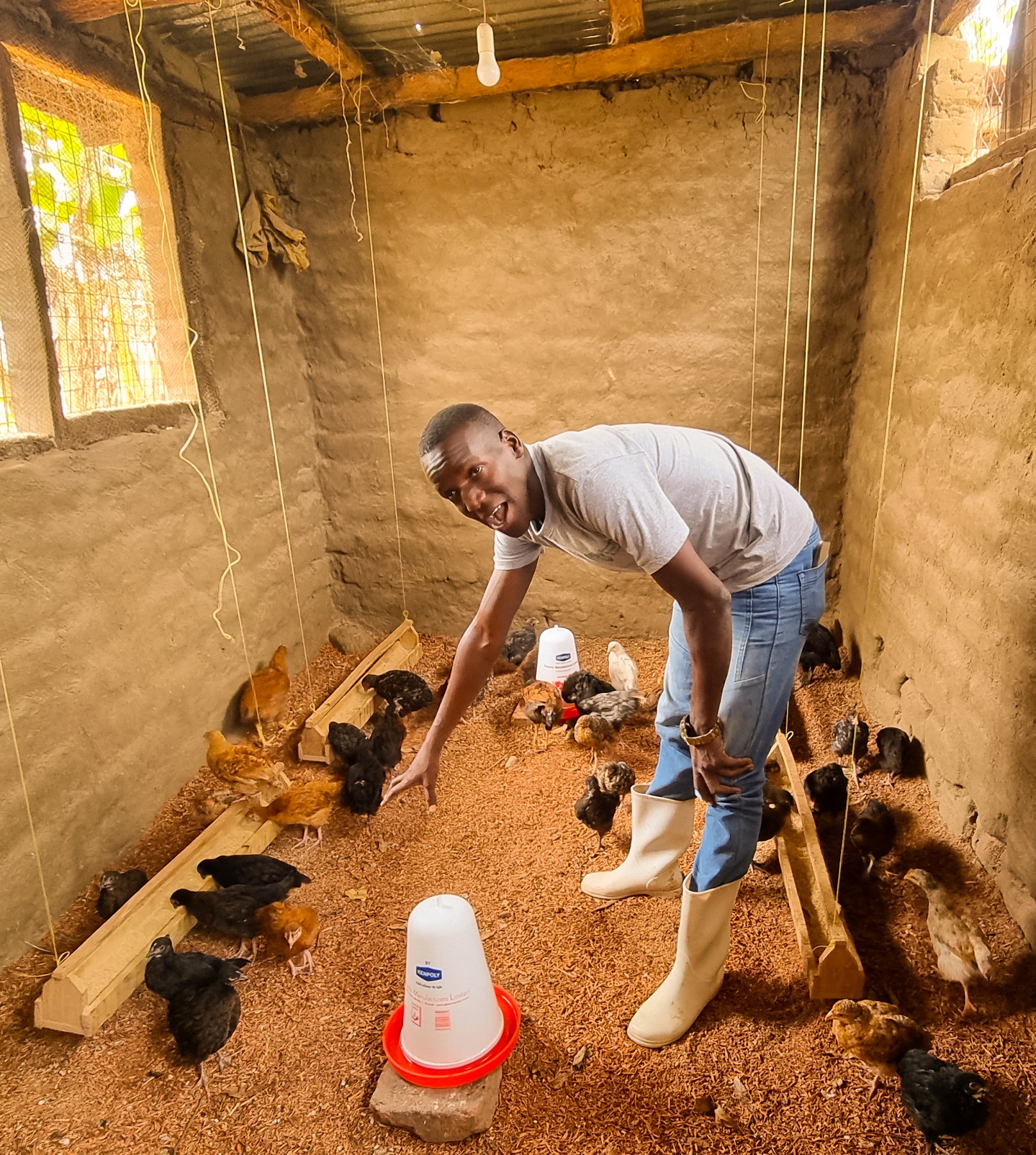 Charles in the Chicken Coop

Now, as an entrepreneur armed with business management skills, Charles is mentoring other young groups, particularly those interested in poultry farming in his village.

He says, “Since the training, my life has transformed, I know exactly what to do and how to do it; I keep records of every transaction and this has helped me to keep track of my expenditure and savings.”

Charles earns about six hundred thousand Uganda shillings($170) per month, and from the proceeds of his multiple businesses, he has acquired a plot of land (15X20) at three million, one hundred thousand Uganda shillings($881) where he intends to build rentals.  Today, he employs his mother and two sisters because as a long-distance student, he sometimes must be at school, especially during the examination time.  They earn one hundred thousand shillings ($28) each per month. They use it to buy seeds and cultivate maize, soya bean, and white sorghum.  Charles who recently married says he can afford to look after a family unlike before.

Encouraged by his success, Charles is onto the next challenge. “I plan to increase my farm, stock, and expand to rearing layers; I also want to attain a degree in veterinary medicine after completing my diploma,” he adds. This week he bought 200 chicks to start his next phase of poultry farming.

Through the business clinic training, youth like Charles have been empowered and their mindset changed to create jobs instead of looking for them. The training has helped them to gain confidence, take risks, and understand that agriculture is a source of livelihood. SAA was able to train and mentor 93 (40F, 53M) in the fiscal year 2021 under their model of youth business clinics.

About The Nippon Foundation and the Program

The Nippon Foundatoin (TNF) is a Japanese private foundation with its mission to serve as a social innovation hub that works to achieve a better society through support for children, persons with disabilities, and disaster recovery. TNF has been funding SAA’s core program since its establishment in 1986 and now supports realization of the SAA strategic plan.

Market-Oriented Agriculure (MOA) is one of the strategic pillars and that seeks to improve knowledge about market trends and inspire an entrepreneurial spirit among smallholder farmers. It works to enhance access to post-harvest agro-processing such as threshing and milling, promotes hermetic grain storage for improved quality and minimises postharvest loss. It equips farmer groups with skills in organizational management, business development, and marketing and establishes linkages with input dealers, output markets, and financial institutions.

Like the case of Charles Dickens, it also conducts youth business clinics as an entry point to "Farming as Business" to unlock potential, job creation, sustainability, and gender inclusiveness, and supports the transition of small groups to larger farmer organisations such as Area Cooperatives Enterprises(ACE) to encourage collective action and bulk marketing among others.