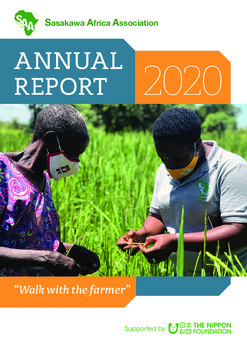 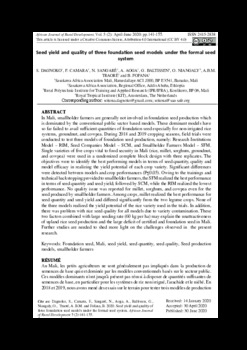 In Mali, smallholder farmers are generally not involved in foundation
seed production which is dominated by the conventional public sector based models. These dominant models have so far failed to avail sufficient quantities of foundation seed especially for non-irrigated rice
systems, groundnut, and cowpea. During 2018 and 2019 cropping seasons, field trials were conducted to test three models of foundation seed production, namely: Research Institutions Model – RIM, Seed Companies Model – SCM, and Smallholder Farmers Model – SFM.
Single varieties of five crops vital to food security in Mali (rice, millet, sorghum, groundnut, and cowpea) were used in a randomized complete block design with three replicates. The objectives were to identify the best performing models in terms of seed quantity, quality and model efficacy in realizing the yield potential of each crop variety. Significant differences were detected between models and crop performances (P≤0.05). Owing to the trainings and technical backstopping provided to smallholder farmers, the SFM realized the best performance in terms of seed quantity and seed yield; followed by SCM, while the RIM realized the lowest performance. No quality issue was reported for millet, sorghum, and cowpea even for the seed produced by smallholder farmers. Among crops, millet realized the best performance for seed quantity and seed yield and differed significantly from the two legume crops. None of the three models realized the yield potential of the rice variety used in the trials. In addition, there was problem with rice seed quality for all models due to variety contamination. These two factors combined with large seeding rate (60 kg per ha) may explain the unattractiveness of upland rice seed production and the large deficit of certified and foundation seed in Mali. Further studies are needed to shed more light on the challenges observed in the present research.